Baking and brewing are related because of their common use of yeast. This relationship has been particularly close in Britain, where for many centuries the brewing trade was also the principle source of yeast for making bread. Before compressed baker’s yeast became available in the late 19th century, bakers in most parts of the world relied upon natural leavens to make bread. Natural leavens are mixtures of flour and water that have been populated by naturally occurring yeast and begun to ferment: today they are more widely referred to as sourdough starters. In Britain, however, commercial and domestic bakers tended to use the yeast-rich froth collected from the surface of brewing beer, known as barm. Until well into the 20th century, breweries were so numerous in this country that most people were within easy reach of a convenient source of barm.

The subject of barm or beer-yeast is an interesting and complex one. It has also given rise to a lot of confusion, with the word sometimes being used to refer to natural leavens or to breads made with beer. The etymology of the word is clearly established, however – barm is a product of the brewing process, with no necessary connection to baking at all.

My recent experiments have not involved barm (a subject I will be returning to in future posts). They have involved beer, though. For a while I had been musing upon the affinity of caraway with beer, and finally got down to developing a recipe a few days ago. Caraway seeds are common in many European and Middle Eastern cuisines, and have a pungent aniseed flavour. In the past, caraway was often used in beer because it  complements the flavour of malted grains. I had in mind a bread combining both. 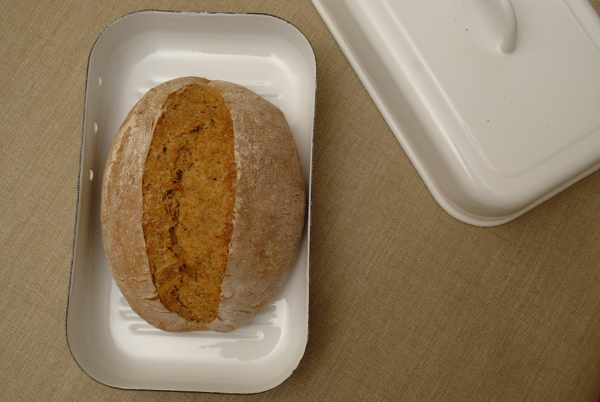 I decided to start with a sponge-type pre-ferment using a porter-style ale. For this I chose ‘Old Growler’ from Growler Brewery (formerly Nethergate Brewery), just the other side of the border in Pentlow, Essex. Porter is very far from being a fashionable style of ale, but Old Growler is the brewery’s signature beer, and with good reason: it’s a rich, complex ale with unusual liquorice notes in the finish.

A sponge is the traditional British name for a pre-ferment made with flour, water and a small quantity of baker’s yeast. A pre-ferment is any flour/water dough or batter that is allowed to start fermenting ahead of actually mixing the bread dough itself. There’s a lot to say about pre-ferments, and you can find out more in chapter 4 of my book. Put simply, a pre-ferment is a way of improving the flavour and texture of bread by extending the period of fermentation.

I used a half-sponge – a batter made with half the total flour from the recipe and all the liquid. To this I added a fraction of the usual quantity of yeast – about quarter of a teaspoon, slightly less than 1g. I left this to ferment for about 12 hours, until it had frothed up to double the volume. 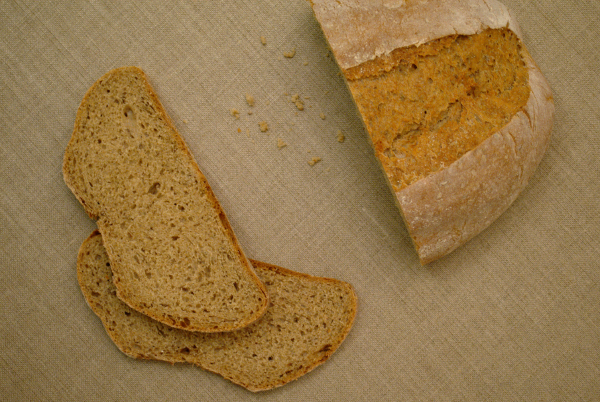 The following day I added the remaining flour, a little salt and some caraway seeds to the sponge and made up the dough. Here’s my formula:

Mix to a thick batter and leave, covered, for about 12 hours until doubled in volume.

Mix and knead the dough as normal and leave to rise. When using a pre-ferment you can expect this to take longer than usual, about 2 hours, but keep an eye on it. Then shape and prove, again for about 2 hours or until doubled in bulk. Bake for 30 minutes at 240°c (or a little longer if your oven doesn’t go that high).

The combination of beer, caraway and a little rye gives this bread a very assertive flavour. Great with a plate of oysters, if that’s your thing, but even more at home with eyewatering cheeses, pickles, mustards or horseradish. Of course, you don’t have to use porter. Any full-bodied ale will work; if you want a more pronounced beer-flavour, try a stout. You could also try substituting fennel seeds for caraway. There’s plenty of room for experiment.

« Bara brith » Flour by the sack