Years ago when I lived in London I used to frequent a small newsagent-cum-delicatessen run by a Turkish family. From under a glass counter at the front of the shop they sold freshly-made pastries and, as it was directly opposite where I worked at the time, it was a convenient lunch stop. Among the regular offerings were chocolate brownies, sold in generous, inch-thick slabs. They were the best brownies I’ve ever had. I’ve long since given up trying to replicate their formula, although I’ve tried a great many recipes over the years.

The history of the brownie is reckoned to go back to the late 19th century and the US. A brownie recipe pioneered at the Palmer House Hotel in Chicago in 1893 is still made there (it’s now part of the Hilton chain). Although people generally associate brownies with chocolate, some early recipes didn’t use it. For example, Fannie Merritt Farmer’s The Boston Cooking School Cook Book of 1896 includes a recipe for brownies made with molasses. What makes this confection distinctive is really its texture, which is cake-like in many respects, but much moister and more dense because it contains no raising agents.

I was sufficiently intrigued by Merritt Farmer’s recipe to give it a go. The original amounts are given in cups, which I’ve translated into metric weights. Because of the relative uncertainty of cup measurements, my version can’t claim to be definitive, so I’ve included the original for comparison.

.
I used walnuts instead of pecans (because I didn’t have any pecans) – about 100g, a bit less than a cup. The recipe – like many from older cookery books – is very short on detail. So much so that I’ll quote it in full:

“Mix ingredients in order given. Bake in small, shallow fancy cake tins, garnishing top of each cake with one-half pecan”

Yes, that’s it. Hard to imagine any contemporary author getting away with something as hurried as that. It seemed sensible to melt the butter before adding the other ingredients, although no mention is made of doing so (whereas we are told that the egg should at least be beaten). The end result is a very thick, sticky batter, thanks largely to the molasses. Molasses is a byproduct of sugar refining, and is a viscous, almost black syrup with a strong burnt flavour. It can be found in most health and whole food shops. Black treacle is virtually the same thing and is even more widely available in the UK, most often under the distinctive Tate and Lyle brand with it’s tins hardly changed since the 19th century. 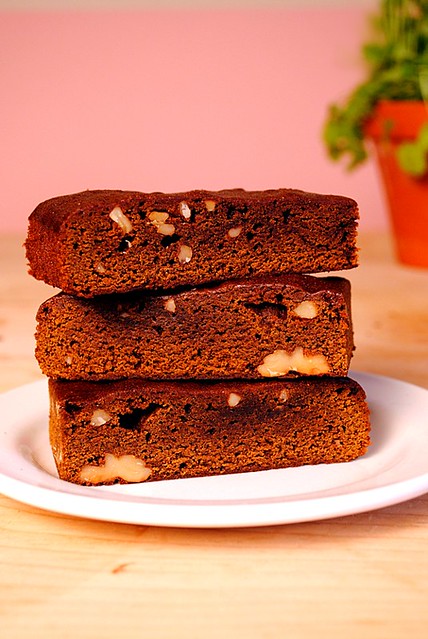 This recipe makes less than most modern brownie recipes, which usually fill a swiss roll tin of proportions in the region of 2x20x30cm, and since I’m lacking in the ‘fancy tin’ department, I had to make do and bake my brownies in an oblong pie tin. If I was to scale the recipe up to fit my usual tin (which is of the dimensions above) I would multiply the amounts by three. 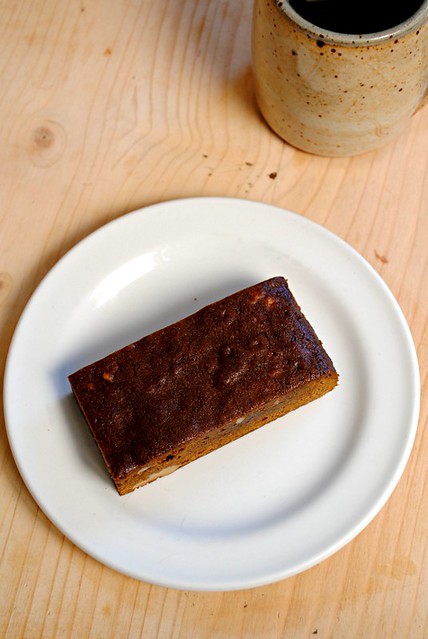 I baked the brownies for 20 minutes at 160°c, at which point I tested them with a skewer, which came out clean. Unlike the usual chocolate brownie, which has a rough, cracked surface, the Merritt Farmer brownies have a smooth, cake-like appearance. In fact, they are very similar to parkin, the dense ginger-cake from Yorkshire and Lancashire. Reviewing my recipe, I think I could have included a bit more butter – perhaps 80g would produce slightly moister results. Molasses contributes most of the flavour – it’s not to everyone’s taste, but if you do like it then these chocolate-free brownies-from-the-past might be right up your street.

« The heat is on » Opposites attract