A tale of two loaves

A colleague at work was telling me the other day about a lentil loaf she had made for a dinner party. We normally talk about really exciting stuff like skydiving and underwater cave exploration, but the other day it was lentil loaf. Anyway, the issue with the lentil loaf was that when it came out of the oven, although it was cooked through, it was still too moist to turn out onto a plate. It was consumed with approval nonetheless. What remained of the loaf, several hours later, had become firmer, and came out of the tin without falling apart. My colleague was perplexed.

The reason I’m banging on about lentils is, naturally enough, that it reminded me of why you shouldn’t eat bread fresh from the oven.

The lentil mixture, not unlike bread dough, contained a fair bit of water. In the oven, during baking, this water turned to steam and escaped from the loaf. But, by the time the loaf was fully cooked, it still contained a substantial amount of water. That was why the loaf was still too soft to hold together without the support of the tin. When my colleague removed it from the oven, the residual heat of the food itself meant that water continued to evaporate from the loaf for some time afterwards. By the time the leftover loaf had thoroughly cooled, it had lost a lot of moisture. Now it was more solid, and could be turned out onto a plate without falling apart. But it was cold.

The solution I proposed for future reference was to bake the loaf beforehand, allow it to cool, then warm it through just prior to serving. Why not just bake it until more of the moisture in the loaf had evaporated? Because then the outside of the loaf would be overbaked, perhaps burnt. My colleague had encountered one of the conundrums of heat transfer – the same conundrum that every year causes millions of barbecued sausages and burgers to be carbonised on the outside and raw-as-nature-intended on the inside.

Heat flows from hot objects to colder ones until both are the same temperature. That’s just how the universe works. In an oven, the hot object is the heat source (electric element, gas flame, burning wood etc.), and the colder one is the food. It’s quite obvious that the flow of heat will encounter the outside surface of the food first. It will take longer to penetrate to the centre of the food. As we know, heat doesn’t just make food hotter – it transforms it physically and chemically. So, during the time it takes for heat energy to penetrate and transform the interior of our food, that same heat energy continues to have an effect on the outside of the food. In other words, the outside of your food is always more ‘cooked’ than the inside. Successful cookery is partly about getting the balance right: ensuring that food is cooked all the way through without it being burnt on the surface. That’s where the inexperienced barbecuer gets caught out.

Now, back to bread. Bread behaves very much like my colleague’s lentil loaf. It absorbs heat, which gradually penetrates to the heart of the loaf. As it does so, the water in the dough turns to steam and escapes. By the time the bread is baked right through – by the time the dough has been completely physically and chemically transformed by the heat of the oven – it still contains water, which continues to evaporate from the loaf. But you have to take it out of the oven, or else the outside of the loaf will burn and, eventually, the whole loaf will shrink and become too dense and hard to be edible.

Ok, so it smells great and of course you want to try some, right here, right now. But you shouldn’t, and here’s why. The bread still contains a lot of moisture, which you will clearly see in the first few minutes after you take it out of the oven. Clouds of steam will be rising from the loaf; even once you can’t see them, the loaf will still be losing moisture for a good long while as it cools. If you slice it at this point, you will find the crumb sticky, with a greyish tinge; it will have a shaggy appearance where the dough has stuck to the knife as it cuts. I hope the photographs below go some way towards illustrating this. 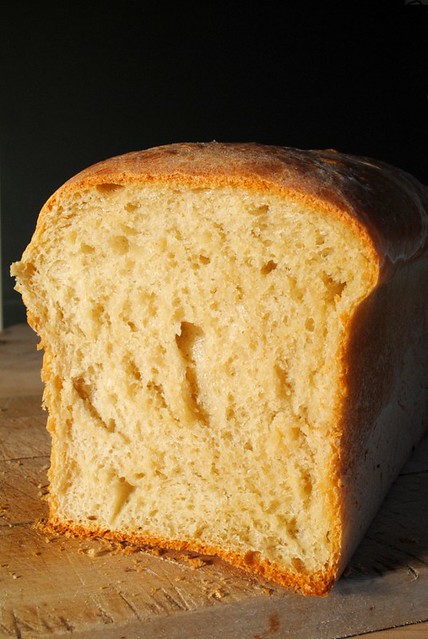 The picture above is of a straightforward white tin loaf which has been sliced a minute or two after coming out of the oven. The picture below is of the same loaf sliced the following day. 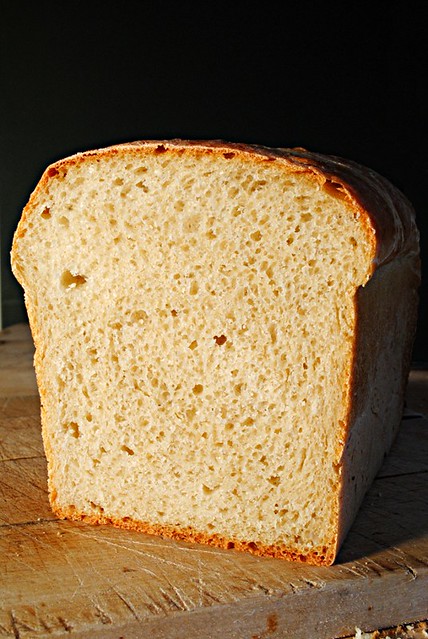 There’s quite a striking difference between them. The fresh-from-the-oven loaf hasn’t sliced cleanly and in places the crumb has formed ragged doughy streaks where it has stuck to the knife. The cooled loaf has sliced beautifully, and the structure of the crumb is clearly visible.

Still-hot bread isn’t very nice to eat. It’s at its best when it has cooled down and lost a good deal more moisture than when it’s fresh from the oven. The bottom line is that freshly-baked bread is soggy bread. And no legally-registered driver wants to eat soggy bread. Apart from having an unpleasant texture, the crumb will quickly revert to a pasty dough as you eat, impacting negatively upon delicate digestive systems.

Some eating establishments engage in the disreputable practice of buying in part-baked bread products (usually small baked goods like bread rolls) and finishing them in the on-site oven as they are needed, a practice known as ‘baking off’. This is done to create the impression that the establishment has a full-on bakery out the back. Of course, in order to create this impression the goods must be served warm, otherwise they may as well buy fully-baked products. As a result, it isn’t uncommon to be served hot rolls billowing forth steam and possessing a sticky, indigestion-creating crumb. Should you encounter such an abomination, you should send it back to the kitchen with a stern rebuke. If not for yourself, then for the sake of future generations.